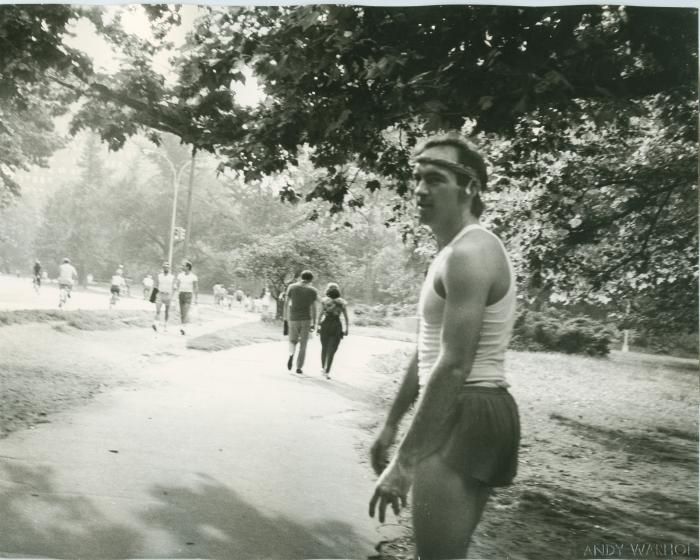 [ A person wearing running attire looks over their left shoulder at the camera while walking along a path through a park. ]

Along with the photograph of Adbul-Jabbar, a photograph of Jon Gould,
a close friend of Warhol, is also included in this exhibition. Gould was
Warhol’s boyfriend in the early 1980s and someone with whom Warhol
fell deeply in love. Gould lived a double life, between being a straight
Paramount vice president in Los Angeles and seeing Warhol secretly in
New York City. Of all the photos taken by Warhol, Gould is the most frequent
subject, and through these images, such as the one in the exhibition, we
are taken on an intimate journey of Warhol’s everyday goings and the
people in his daily routine. Although Gould is simply taking a morning
jog through Central Park, we can understand the love Warhol has for this
man as he documents their life together. In 1986 Gould would pass away,
from complications related to AIDS, with some scholars writing that his
death influenced Warhol’s later work that features male figures along with
themes of AIDS, mourning, and forgiveness.
–Double Play