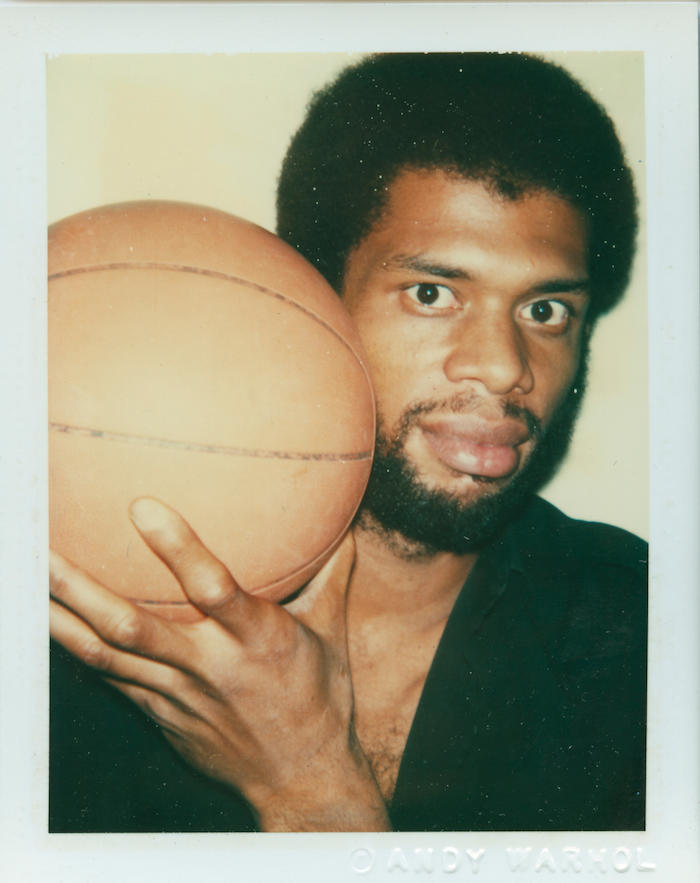 [ A colorful half-length photograph of a man holding a basketball. He wears black clothing with short curvy black hair and black beard. In the background is a white wall. ]

As part of the Athlete Series, Andy Warhol was commissioned by notable
art collector Richard Weisman to paint portraits of Kareem Abdul-Jabbar,
Muhammad Ali, Chris Evert, Rod Gilbert, Dorothy Hamill, Jack Nicklaus,
Pelé, Tom Seaver, Willie Shoemaker, and O.J. Simpson. Weisman
wanted to bring the worlds of art and sports together to understand their
connections and attract new audiences to each area. Each athlete was
also photographed extensively throughout the sitting process. Warhol
understood that the landscape of celebrity was changing in America to
include sports superstars, whose cultural significance was ever growing.
Abdul-Jabbar embodies this world by inventing the “sky hook” and leading
the Los Angeles Lakers to multiple NBA championships, but also by
boycotting the 1968 Olympic Team in response to America’s discriminatory
treatment of African-Americans. He additionally changed his name from
Lew Alcindor to Kareem Abdul-Jabbar after converting to Islam, a public
move that would see him face vast racist and Islamophobic reactions.
–Double Play

Legendary NBA basketball player for the LA Lakers from 1975–1989.