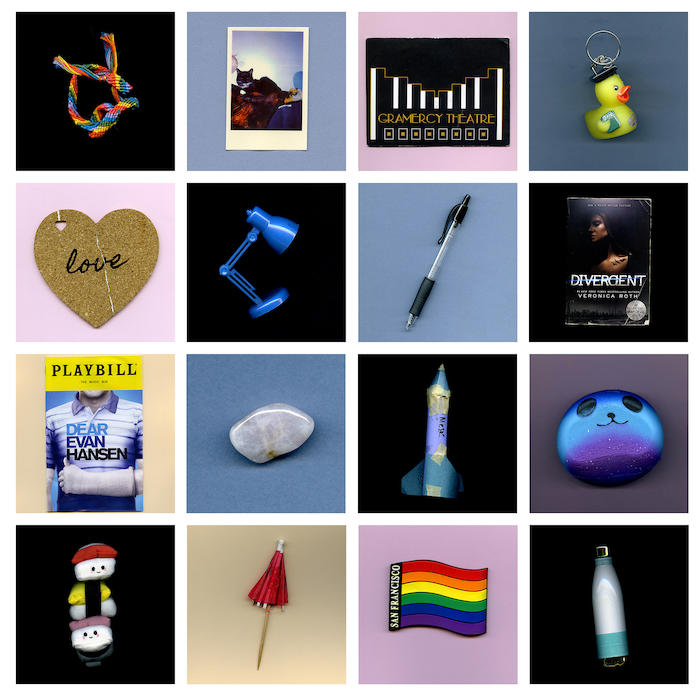 Ephemera from Liz Lashkov, UAlbany First Year Student, Fall Semester 2020
1. This is one of the many bracelets I have made over my years attending a summer camp in northern Pennsylvania. I went there for eight years and worked there as a counselor for three, and over those 11 years I’ve probably made 50 bracelets, or at least I started them. This one is probably one of the oldest ones I still have.
2. This is a Polaroid of my cat, Ninja. I have had her for three years and she is very important to me. I can’t send my cat, so instead I’ll send a picture of her.
3. These are my concert tickets and VIP pass to a concert I went to last March. I kept these because I love going to concerts and this one was extremely fun. My best friend and I saw a band called Crown the Empire, and we have been listening to their songs for years.
4. This is a University of Albany rubber duck. Every time I see a funny rubber duck, I always buy them, so during my first day at the university I found this and got it right away. I don’t have a picture as they are not in this house, but I have about 30 rubber ducks with random designs and meanings and will continue to collect more.
5. This is an old coaster I have. The white line is hot glue I used to fix it when it broke in half. I love fixing things if and when they break, and this is just a smaller example of something I fixed.
6. This is a tiny lamp. It is sentimental for me because after getting my first job and my first paycheck, this lamp was the first thing I purchased. I bought it four years ago and have kept it on my desk ever since.
7. This is one of my favorite pens. I included this because I am very picky about what pen I use, and I have been using these for years and they are great.
8. Divergent is one of the first dystopian books I’ve ever read, and this series is what got me so interested in dystopian novels. This led to me reading other novels in this genre, such as Maze Runner. It is probably my favorite genre, which is why this book is important to me.
9. This is my playbill from the Broadway show Dear Evan Hansen. I went to this show with my best friend and it is the first show I remember going to (I saw Mamma Mia when I was seven, so I don’t actually remember anything). It was a great experience, and this musical led me to discover so many other musicals.
10. This rock was a gift from my dad from some years ago. I forgot what kind of rock it is, but it supposedly brings good luck and I keep it on my desk.
11. This is a paper and tape rocket I made in 10th grade with my best friend and some other students for a class. This is important to me and I kept it all these years because I love building now, and creating this really started my interest in building and coming up with a functioning design. This was made for a project where each group’s rocket was shot into the sky and my group’s won for whose was the highest.
12. I’m not sure what this is actually called, but I used to use it as a stress ball during junior year of high school. It was a very stressful year for me, so having something at school with me that both looked cute and was really squishy helped me deal with my anxiety.
13. This is a plushie of sushi. I included this because sushi is my favorite food. I used to always get sushi after school with my dad during middle school. We haven’t done that since I was 12, but I still regularly get sushi just because I love it.
14. This is a tiny umbrella. I keep every single tiny umbrella I have gotten on vacations. I used to never label where I got them, so this one isn’t labeled, but most likely it’s from Miami. Some of my other umbrellas are from California or even just restaurants near my house.
15. This is an LGBTQIA+ flag magnet that I purchased in San Francisco in 2016 during a vacation to California. This is important to me because, while I may not be part of this community, I greatly support them and I think it’s important to stand up for those that so often are mistreated for just being the way they are.
16. This is my first reusable bottle. I have had it for probably three years and it has been through a lot. This bottle actually originally had a llama on it, but after being used so much the llama faded and eventually disappeared. I got this bottle after I started paying more attention to the effect we are having on our planet. Now I pay more attention to the impact I have and how wasteful I am. Getting this bottle could be considered the start of my goal to be zero/low waste.